“I have the strongest freaking legs!”

I love being active. Trying new ways to keep my mind and body strong has always been a big part of my life. At 38, I realize I’m not getting any younger, so I make a concerted effort to make sure I am always moving.

About seven years ago, I started participating in those mud runs. You’ve probably seen pictures on Facebook or Instagram of people caked in mud, sweat dripping down their bodies and exhilaration painted all over their faces. Yeah, those. I love them. I’m a kid at heart, so any opportunity I have to run around in mud and challenge myself both mentally and physically with crazy ass obstacles is perfect for me.

Two summers ago, I signed up to run with a couple buddies on an early, chilly and wet morning in May. As we started getting ready for the race, I began stressing out about my ankles. I’m good for a serious ankle sprain every other summer, usually while playing softball or basketball. (I have so much scar tissue that I have a permanent kankle on my left leg.) Anyway, I started getting all of these terrible feelings of spraining my ankle again, and it was really messing my head up. It consumed me so much that I kept telling the guys that I was pretty certain that I was going to hurt myself.

As we were walking up to the starting line, I just happened to look over at one of the obstacles nearby. Medics were carrying a guy off the course whose ankle was pointing in the opposite direction. Literally hanging off his leg. Trying to hold the vomit in, I ran to my car and grabbed my ankle braces and laced them up tight. I knew something was going to happen to me, and now it was in my head. Big time.

Once the race started, I found myself analyzing every step I took. I dodged as many holes and divets on the ground as I could. Two obstacles in, it happened. I lost my grip on a steel bar, fell into shallow water and hit the ground earlier than I expected. POP! POP! I knew it was bad. Let’s just say my right leg and ankle bent the wrong way. I climbed out and tried to walk it off. Nope. I was devastated and furious as I hobbled off the course to the first aid tent. I CALLED IT! I KNEW THIS WOULD HAPPEN!

Iced down and taped up, I sat in the cold for the next hour waiting for the guys to finish. It was infuriating– as was the next three months I spent limping around.

I was done with that crap. No more. My legs were too weak and I was getting too old. I carried that attitude with me for the next two years. I was scared of every step I took, every move I made in the gym and every rebound I went up for. The negative feeling of defeat was in my head for good.

That was until this spring when I put an end to that way of thinking. Softball started, and I began repeating in my head, “I have the strongest legs. The strongest legs in the world.” I looked up and out while running, not down like I used to. I was like a running back going to and from my position in the outfield. It felt like I was 15 again. I had a positive attitude, and more importantly, I was HAVING FUN. I hadn’t felt this way for so long because I was so worried I would get injured. Not anymore. This way of thinking changed the game. Literally. 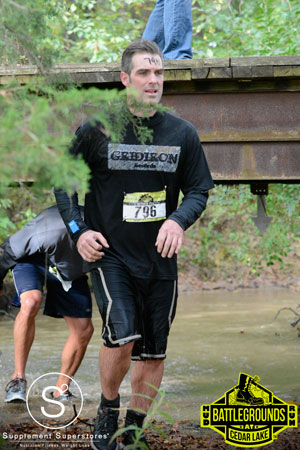 I saw an ad for a Mud Run last May. I did not hesitate. I did not question. I did not stress. My wife and I signed up and we KILLED it. I stomped around that course like I had a new set of legs, all while repeating to myself, “I have the strongest legs in the world.” It loosened me up, and I got to enjoy running with my wife outdoors on a beautiful day. It was an amazing experience. I did it again this past weekend, and this time I was basically yelling out loud to my buddy, “Dude, I have the freaking strongest legs right now.”

Yeah, it may sound like a strange or unnatural to say about yourself, but that doesn’t matter. What matters is that you say it and you BELIEVE it. Just a slight shift in my attitude not only changed me mentally, but also physically. If this summer was any indication, I’m going to keep thinking this way for a long time.

» Watch & Read This » “I have the strongest freaking legs!”

About the Author: Tim

3 Responses to “I have the strongest freaking legs!”